There’s a lot of catching up: details of the trip to and from Leicester, about which I did not blog daily, as I had intended to do; the discovery of the major goof in what I thought was the final version of KING’S GAMES: A Memoir of Richard III, duplicated in KING’S GAMES: The Commentaries – and the shepherding of both books through the review process one more time; then finding out the reason why I had slowed down and everything was taking so long: my health.

The Sleep Study I had no time for, before leaving the country – and then had to wait two weeks, after returning, before it could be done - was very enlightening.

Although I have no idea how in the world I could stop breathing on an average of 65 times an hour (one of which lasted 23 seconds) and still be around to type this, I am three weeks into CPAP therapy and actually staying awake most afternoons.

Staying awake is only now finally translating into, “literarily functioning.” I have spent more time being amusing and smarmy on Facebook than tending to business – because, for the last several months, I couldn’t face having to confess than I am no longer a Spring Chicken, that my spring has sprung, and that my concentration level was somewhere at the elevation of Death Valley.

However, last Saturday, I turned a corner and it was great. I may not be remanufacturing sleep-deprived brain cells, but at least am finally awake enough to know I’m not sleeping. 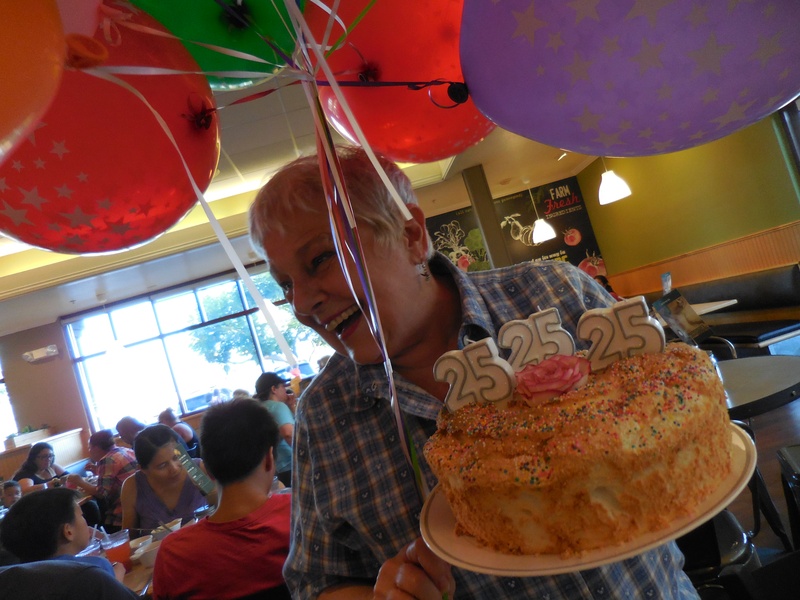 I can at last face the fact that Old is Not Yet Dead – and a definite advantage over the latter. It was a terrific day.

This afternoon, I actually sat down and created the title card for the PowerPoint presentation, “An Evening with Richard III,” which will include some Wars of the Roses background and a whole bunch of photos of the historic occasion, along with my modest adventures in Leicester. The whole thing has to be outlined because those of us who know me, know that if I wing it, we’ll be there until the following Tuesday, when I run out of photos.

It was a brilliant experience, and I look forward to sharing it at 7 p.m. on August 25 in Woodland Hills, California, but it’s going to be a semi-private event, by invitation only, as the venue has limited seating.

If you are interested in joining us, please message me here (or on Facebook with your email address) and I will put you on the invitation list. You will receive a proper Evite for a response. I’m not going to put up a Facebook invitation page, just announce it on each of my Facebook Author pages.

In the meantime, I’m aiming to set up a schedule of monthly blog entries, probably around the 20th of the month (which will be an easy date to remember) – and am considering casting around for a guest blogger or two.

Reply Nance Crawford
8:30 PM on July 7, 2015
Nan Van 3:40 PM on July 1, 2015
Hi, Nance! I'm glad you're working through the sleep/breathing issues, and it sounds as though some fine experts are helping with that. I loved your NPR West interview. It's always exciting to see the progress of your wonderful projects, and also to realize how many people share your passion. Count me among the Richardians. :-)

Thanks, Nancy! With everything happening, I am sorry I wasn't able to get to see the play - and I owe Stan an apology, too. It was good to learn that you had a successful run. I hope that whatever you're working on in August, you'll save the 25th for Richard (there are a couple of local folks who have expressed interest in starting an L.A. chapter of the Richard III Society, so it's going to be interesting to see if anyone of them shows up!

Thanks, Sue! It was a happy time! XO

Wendy, I have to say it was weird to hear about it from the doctor - but I had awakened a couple of times, since getting back from London, fighting for breath but had no idea it was happening without waking me up. The good part is that it explains the embarrassing memory burps that seemed to be part of my every day. I think that's getting better, though. And since I now know that it was lack of sleep that caused the gaps, and also the weight I put on and didn't seem to be able to lose, I'm grateful that something is being done about it. XO

Reply Nance Crawford
3:03 AM on June 27, 2015
[Kitty Burns-Nasarow]
Hi Nance,
If you need any help with the PowerPoint presentation, let me know. I know PowerPoint very well and would be happy to help you.
Love,
Kitty

Hi, Kitty! So far, I'm okay with PowerPoint - it's Photoshopping that's taking my mind away! But stand by! (It's actually the script that's frustrating - I'm sort of going to depend on putting the images up there and riffing on them, the Good Lord have mercy on us all!) And I hope you and Nick are giving serious thought to jaunting down here for the horror. . .
XO!

Hi, Kitty! So far, I'm okay with PowerPoint - it's Photoshopping that's taking my mind away! But stand by! (It's actually the script that's frustrating - I'm sort of going to depend on putting the images up there and riffing on them, the Good Lord have mercy on us all! (And I hope you and Nick are giving serious thought to jaunting down here for the horror.)
XO!

Thanks, Pookie. I tried responding to everyone yesterday, but the web site would not allow me access. Always good to know you're there - and here!

Reply Nance Crawford
10:56 PM on June 26, 2015
[Larry R]
Hang in there,Nance! I just got my CPAP machine a year ago. Hated it the first month, but well worth it, since I'm no longer forgetting what I forgot to forget and losing it. In the long run, you'll be back to normal, as I am (almost). I really enjoy your blogs. Good luck!

Thanks, Larry! It's a challenge but it's still not quite a month. I am looking forward to hanging onto thoughts and being able to snap up memories on command - I'm told it will happen. Hanging in there!