Didn't intend to take this long to get back to you - but the nightmare of proofing Dreams & Portents looks like it may be soon resolved.

There are now three different formatted versions of the book - the original, which is pretty close to what I hoped to achieve when this whole thing commenced - a format for Kindle, which is wholly different (more like your regular dictionary listings) and, if it is accepted, will be unique to the induustry - and the backup print version, which resembles the Kindle layout, just in case my genius is not appreciated by the invisible quality control folks at CreateSpace.

Which reminds me, if you've been checking out both the Dragon Solstice and Dreams & Portents Facebook pages (yep, one for each - and thank you, thank you, those who have "Liked" them - you are much loved) you are aware that I am in a mini-tussle with Amazon; although, I must admit, I don't think Amazon is entirely aware of it, yet. It seems Amazon claims copyright on all the reviews that are posted there - which is something like stepping onto the shore of Balboa Beach, planting a flag, and claiming it for your favorite Renaissance ruler: you can yell all you want but it don't make it so when the Americans show up. Some smarmy lawyer snuck it into the Terms of Agreement because he could - I really don't like things like that.

More later, if they ever answer my query.

And I promised a link or two to reviews of HEARTBREAK HOUSE at the Theatricum Botanicum - it's just remarkable, as is everything they do there - and David, as the only sane man among the looneys, is a hoot.

Here are a links to two of the reviews: Backstage (the theater/film paper) and Blog Critics. If you want to take a look at the other six raves, and get a peek at some beautiful photos of the place, go for it. Oh, and that's "Grandpa Walton's" real granddaughter with David, below. 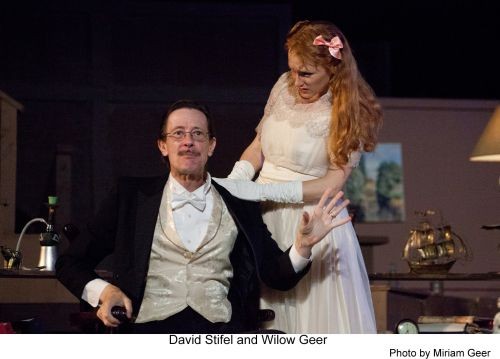 GingerP says...
I'm looking forward to reading "Dreams & Portents" didn't know there was a fb page for it... BRB... Fantastic! I'm now a fan!
I have such odd and involved dreams and I'm looking forward to seeing what it has to say. I have actually been writing down a lot of my odd dreams lately. Perhaps there's some link to why we dream the way we do and about the things and people we do...?

Great to make notes during the night, if you can manage it - for years, I've kept a pencil and pad in the end table, next to the bed; every once in a while I wake up in the morning to find an almost indecipherable list of words scribbled every which-way - and half the time I can't remember what I was referring to - that's actually happened if I write a list of words right when I wake up but then delay looking up the description. It can be an adventure.

Sue R. says...
Insanity insanity that Amazon would consider owning the opinion of others...Keep at it girl ...you do an amazing job!

Thanks for the good thoughts. Usually Amazon's pretty responsive. I have a feeling they realize it's such a hot potato it's better to keep hands off - it will be interesting to see if they pull that little clause out of their document without making a deal of it.